The toddlers and preschoolers in my daycare love playing with cobs of corn in the fall.  I have a friend who has a huge cornfield and every autumn, she brings us a big bucketful of corn cobs still in their husks.    If you don’t happen to have a friend who can get their hands on some corn for you, the decorative stalks that you can buy at the farmer’s market will do just fine!

Your child can husk the corn, and then spend hours removing the kernels from the cob.  The corn kernels can then be used as a base in a fall sensory bin. 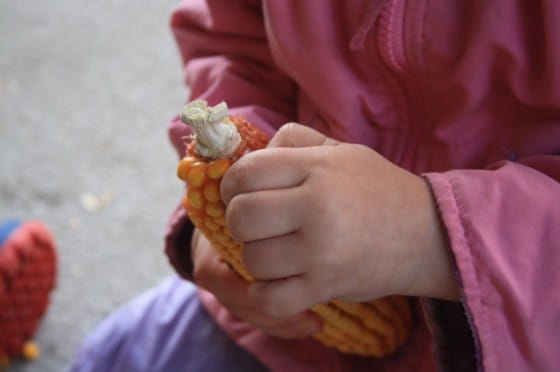 You can also set up a corn run like we here did by attaching funnels and hoses to a chain link fence.  The hooligans played with ours for days.

The corn cobs can also be used as loose parts in a play kitchen or around the yard, the way the hooligans were playing with ours yesterday morning today.

It was a glorious fall day, and we spent the better part of it playing in the leaves in the front yard.   It was sunny and warm, and felt more like September than November.  It was heavenly. 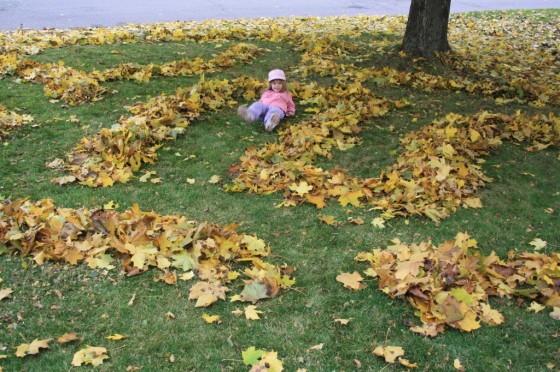 The hooligans love it when I make them a leaf maze or a leaf house.  This morning they wanted a house, and they instructed me to make bedrooms, a kitchen, a bathroom and a living room.

Two of the Hooligans had dragged a very large branch home from the bus stop earlier in the morning, and they decided it would make a very good “kitchen counter”. 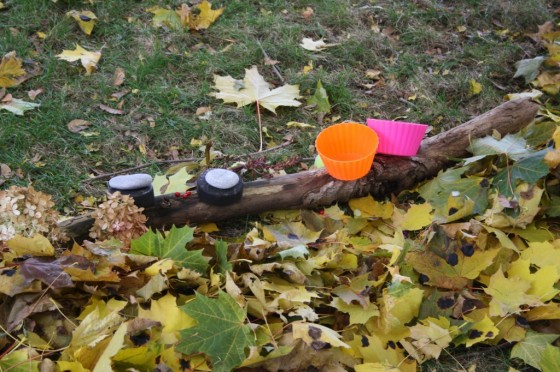 We set about finding random objects to put in the kitchen: dried hydrangea blooms, sticks, stones, hockey pucks etc., and then we remembered our corn. 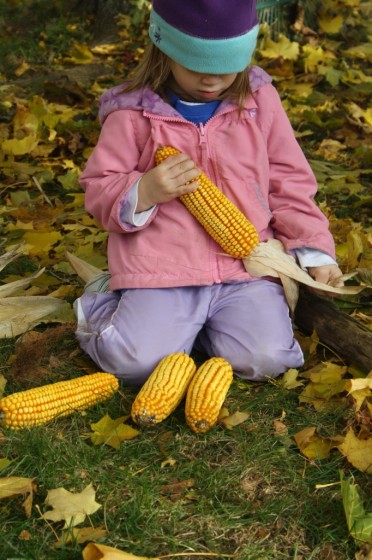 Some of the cobs still needed husking so this little one set about getting to work.

The corn cobs quickly became the most coveted item in the leaf kitchen. 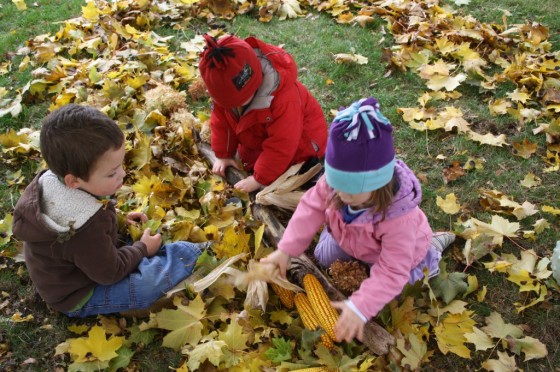 t seemed that at any given time, someone (or more than one) was a piece of corn or two. 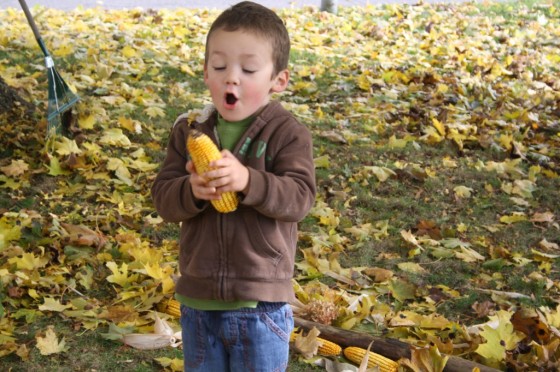 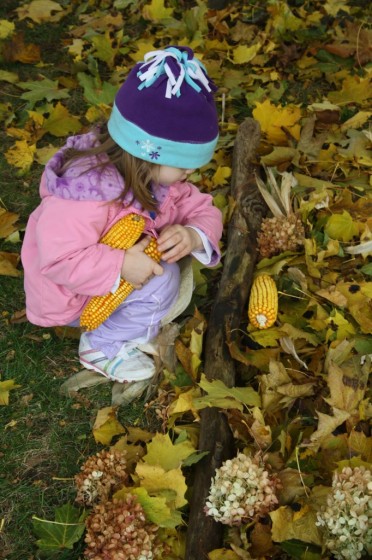 Then, our youngest Hooligan discovered the joys of removing the kernels from the cob.  Oh, what fun!  Everyone joined in, and that became the project of the day. 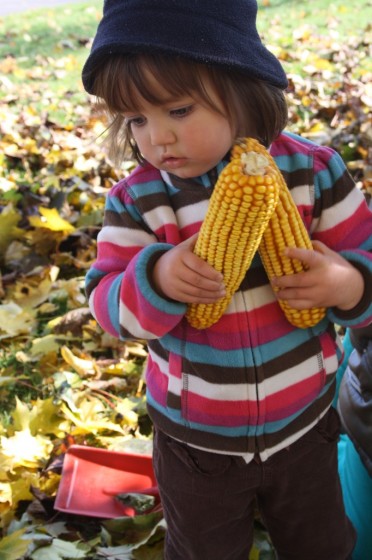 They were back at it today, stripping the cobs, kernel by kernel.  I am often amazed by what fascinates these little people, and how something that looks so ordinary to us, like a cob of corn, can completely captivate a child.  So much that they race back to it day after day.  Even the “just 2” year old was as serious about her task as the older ones were.

I love the little conversations that they have when they’re working together like this.  I love their quiet determination. 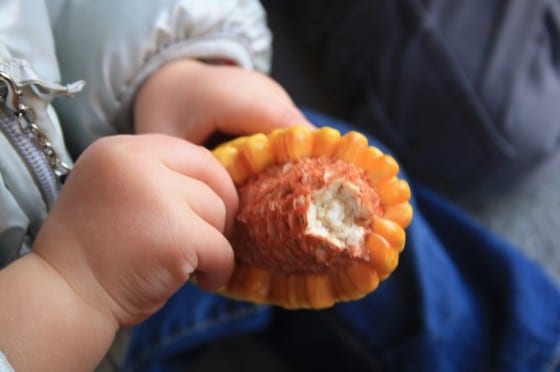 They were still busy playing with their corn when it was time to go home, I I predict this activity will continue through the rest of the week.

I think we’ll have a fine supply of corn kernels to play with in the weeks to come. 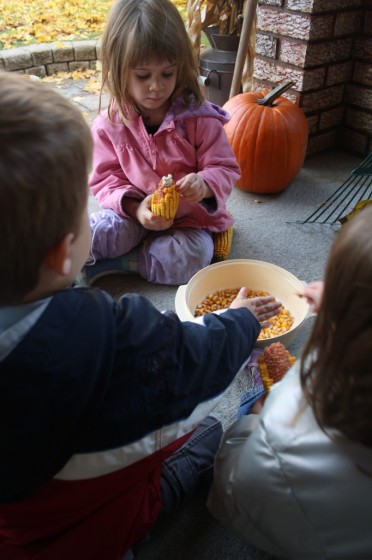 Corn cobs.  Don’t overlook the play possibilities that they offer! 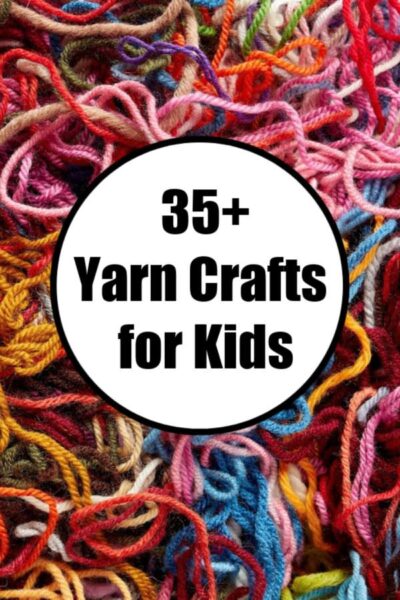 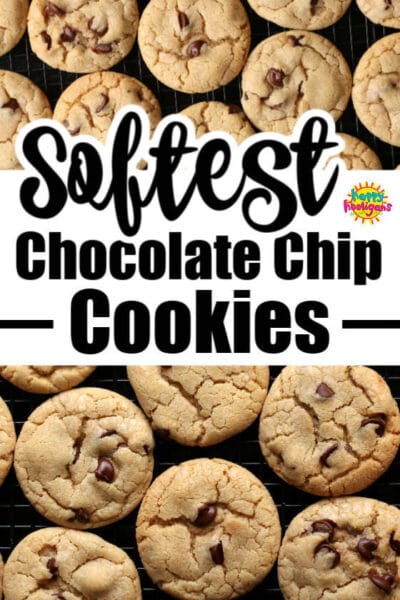 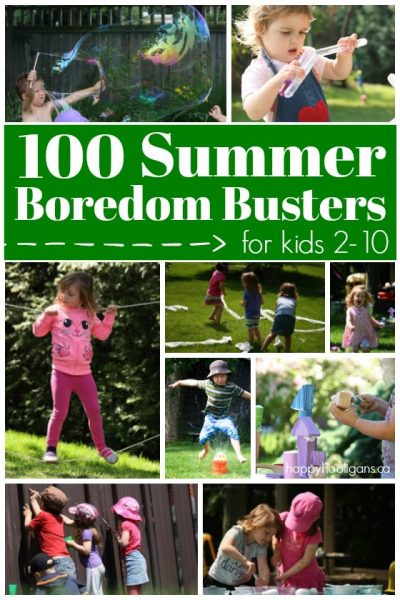 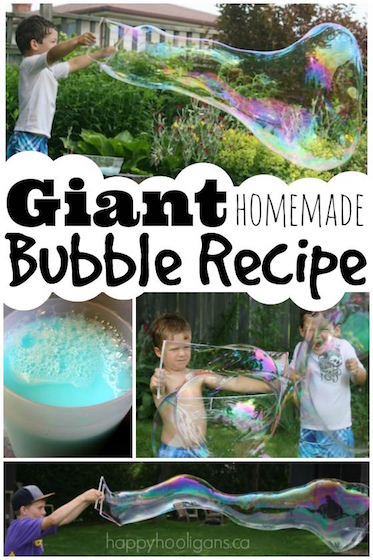 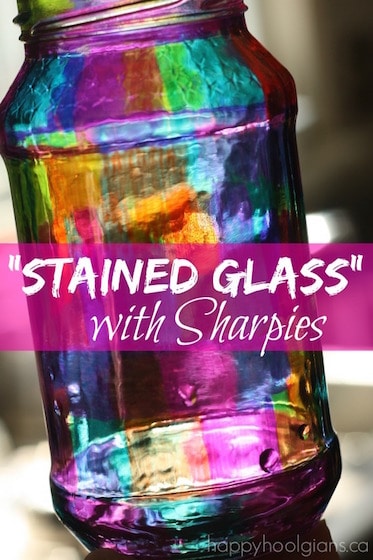 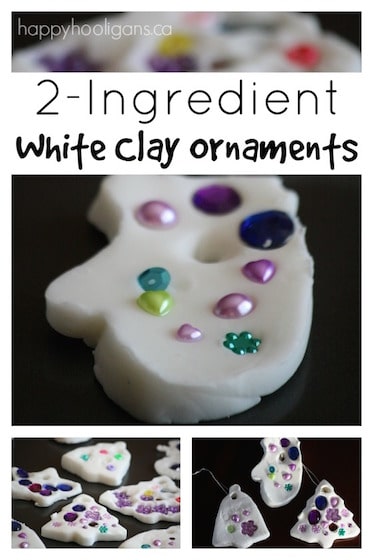